“A Thousand Years” is a song by American singer and songwriter Christina Perri. This song was taken from the album The Twilight Saga: Breaking Dawn – Part 1: Original Motion Picture Soundtrack. This song is presented as the second single from the album. This song was released in a digital download format on October 18, 2011 throughout the World. 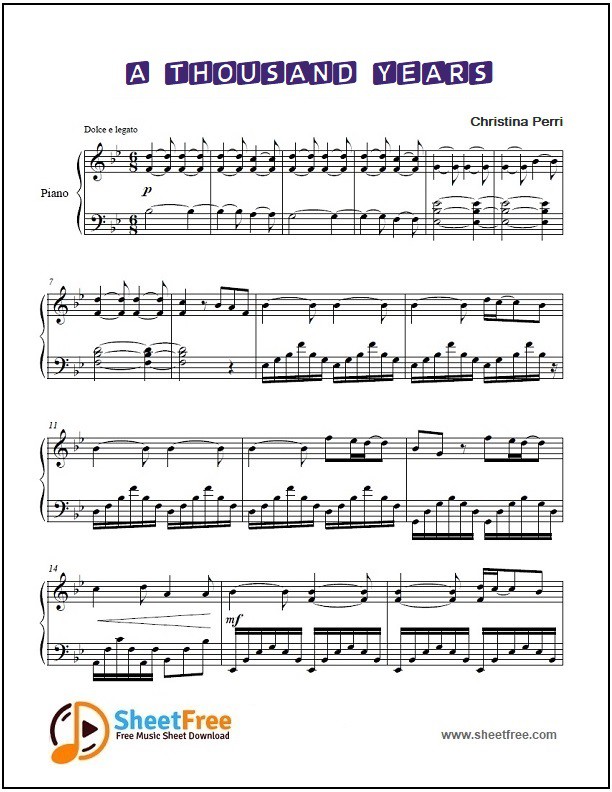 About ‘A Thousand Years’

The song “A Thousand Years” which became the soundtrack of Christina Perri’s Twilight movie is so popular in the world. Moreover, the song from Pennsylvania, United States can be called very mellow. Want to know the story behind the song?

Christina revealed, she deliberately created the song specifically for the Twilight movie. The reason Christina really like the film, and always cry when watching it. Therefore, the lyrics of this song are so romantic but full of turmoil.

“I wrote the song for the movie Twilight, because I am a Twilight fan. They offered me. When watching the film I always cried. I like the cast. I hope I am a vampire,” Christina said laughing while talking in Tennis Indoor, Senayan, Jakarta, Tuesday 5 June 2012.

“This song is not about me, it is for the film,” he continued.

When creating the song, Christina imagined herself in a story in a book and movie Twilight. Then, he imagined romantic scenes between Edward Cullen and Bella in the movie Twilight.

“I always dreamed I lived in books and films, like Twilight. I believe it’s real, even though it’s not real. Every song I’m about is someone, like” A Thousand Years “a song about Edward and Bella (Twilight),” he said.

On the week of October 23, 2011, this song debuted at number 74 on the American Billboard Hot 100 chart, and No. 70 on the Canada Hot 100. This song eventually won the 31st position on the Billboard Hot 100, making it Christina’s second song that made it through the top 40 hits . December 2012, this song has sold more than 2 million digital downloads in the United States.

This song tells about the pain of waiting a woman, through fragments of the lyrics “I have edited, waiting for you“. Although he was afraid, he finally decided to show his love to the man. After feeling certain that the man is a person who has been long awaited, true love. This woman will not let go of her longing for someone else because she has loved him for life. The title “A Thousand years” is a description of the meaning of the word forever. This woman also promised to continue to love, through fragments of the lyrics “I’ll love for a thousand more“.