Canon in D from Johann Pachelbel is one of the most popular Classical music as well as a masterpiece from Pachelbel. This is a great achievement considering that this music was composed 300 years ago. This song was created for the marriage of his best friend, Johann Christoph Bach (older brother of Johan Sebastian Bach) in 1694. 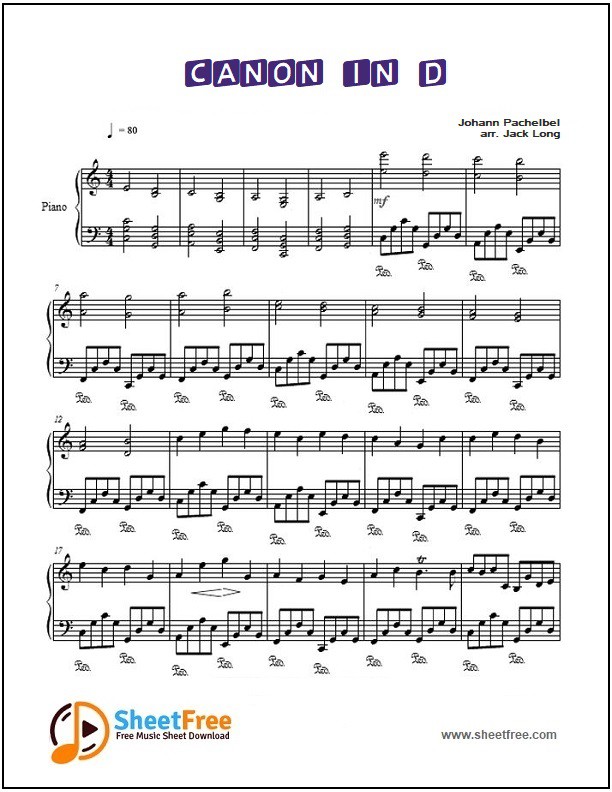 About ‘Canon in D’

Canon in D is a work of art that gives its own nuances to music lovers, its beautiful and calm music is very easily recognizable, often we even encounter it in the theme of a film, advertisement, or in another song.

Johann Pachelbel was born in 1653 and died in 1706. In 1671, at the age of 18, he moved to Vienna (Austria) where he was a student there. In 1692 Pachelbel moved to Nuremburg where he remained until when he died in 1706. Canon was written around 1680 and is the most famous musical work of Pachelbel. The original song was written for three violins with bass accompaniment and a gigue.

One of Johann Pachelbel’s great works best known and best remembered by classical music lovers around the world is Canon in D Major. The Canon word I’m talking about here is certainly not Canon’s cannon gun that is capable of firing bullets right on target or Canon’s brand of digital cameras that are already very well known. No, it’s not Canon that I mean.

Canon In D Major is one of the classic works that was successfully created by Pachelbel in European Baroque. The mention of the word Canon here refers to one way or technique in playing the rhythm of music in which a set of tones will be repeated continuously based on certain intervals. Canon is music with tone repetition or imitation characteristics.

The main characteristic of a classic Canon is that the music will have the same rhythm at the beginning of the song and will separate completely in the middle of the song, so that it will give the impression of overlapping or interlocking tones – connecting between one note with the same tone other. The process itself is actually simple, but the way to position a note correctly until a perfectly composed rhythm is created is not an easy task.

Pachelbel himself created the Canon in D Major around 1680. The history of Canon in D was forgotten for almost 300 years, until finally this classic work was first introduced to the public by Gustav Beckmann in 1919. Beckmann at that time incorporated pieces of this work into in his music article entitled Pachelbel’s Chamber Music.

Canon in D Major itself was played for the first time in 1940 by Arthur Fiedler. In 1970, a French conductor named Jean-Francois Paillard began recording and introducing this classic work to the wider public. Paillard, through his orchestral performance, was able to display very well the classic compositions of Canon in D Major, which had long been buried by time. Since then this classic work has become very famous and has even become the basis of many modern songs today.

Canon in D Major is also often played at wedding events in various countries and has become a compulsory song on some of the most popular classical music compilation albums worldwide. A writer once concluded that the classic Canon in D Major was indeed specially made by Pachelbel to be played at a wedding of his best friend named Johann Christoph Bach on October 23, 1694. Johann Christoph Bach is a distant cousin of Johann Sebastian Bach, one of the Baroque compositions most famous in his day.

At that time the musical performance at the wedding was played by Johann Pachelbel, Johann Ambrosius Bach and several other classical musicians. Johann Ambrose Bach himself is the father of Johann Sebastian Bach. There is a historical fact that is quite interesting to note that in one of the stories also told if Pachelbel was a person who became a teacher for Johann Sebastian Bach.