Can’t Help Falling in Love is a song popularized by Elvis Presley. This song is about someone who is in love. Also in this song, shows his deep love through the lyrics which show he gave his life to his partner “take my hand, take my whole life too. If I can’t help falling in love with you.” 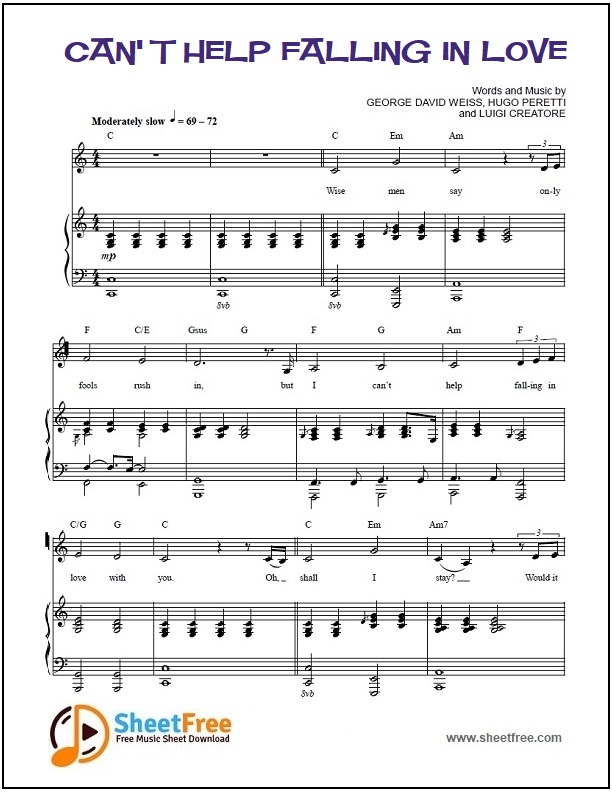 About ‘Can’t Help Falling in Love’

The song “Can’t Help Falling in Love” was written by Hugo Peretti, Luigi Creatore, and George David Weiss. The melody of this song comes from the song “Plaisir d’amour” written by Jean-Paul-Égide Martini in 1741. This song is one of the songs on the Blue Hawaii album released in 1961. In the same year, musicians with the nickname The King of Rock and Roll also made a musical film also called Blue Hawaii. Blue Hawaii album even managed to record a record as the most popular album in the United States which lasted for 20 consecutive weeks. This record could only be broken by Fleetwood Mac with the album Rumors in 1977.

Before it was sung by Ed Warren, this song also first filled the films Coyote Ugly (2000) and Lilo & Stitch (2002). Besides that, the song “Can’t Help Falling in Love” was also re-recorded by many musicians, one of them was the reggae group from England, UB40 in 1993. After a few years, this song was re-recorded by A-Teens for the EP Pop ’til album You Drop! which is used for the movie soundtrack of Lilo & Stitch (2002). British punk band Leatherface also released a punk version of this song which was later used in the last episode of the Sons of Anarchy series.

Film Conjuring 2 (2016) is a horror film produced by Malaysian-born director James Wan. Unlike the first film Conjuring (2013), in this second sequel James Wan managed to dig deeper into the character of Ed and Lorraine through his love affair. The love story of these two lovebirds can be seen throughout the film from the start of dialogue, gestures, scenes, and music especially the song “Can’t Help Falling in Love”. This song strengthens the relationship between the two in difficult situations and conditions in the story without certain pretensions.

Throughout the film the audience can feel the strong romance between Ed and Lorraine. Besides being a married couple, they both are also able to maintain the romanticism of a relationship with the melodious and solemn song called “Can’t Help Falling in Love”. In the midst of matters of the occult, Ed had sung this song with four of Hodgson’s daughters including Janet. He sang the song in a low-pitched voice by Elvis Presley while playing an old guitar belonging to the Hodgson family. The atmosphere that was initially tense changed immediately to become more calm and peaceful.

In film, music becomes one of the elements that is able to influence the atmosphere in a scene. For example in a horror movie, usually when there are scary scenes there will be loud music that will surprise the audience. Or in drama movies, when there are sad scenes there is usually music that dramatizes the atmosphere more and more sad. Music can even awaken the audience’s imagination in one film scene when they hear it in their daily lives. Because of that music becomes an important part in an audio-visual medium.

The scene of Ed Warren singing the song “Can’t Help Falling in Love” is an example of diegetic music. The music element in this scene is sung directly by the character which means that this song has become one part of the story. For those who have watched this film will surely feel the warmth of the family in the midst of the tension of the story. Besides Ed playing guitar, there is one more scene that is the most romantic part in the film Conjuring 2. That scene is when Lorraine plays the record song “Can’t Help Falling in Love” after The Enfield Poltergeist case ends. Ed and Lorraine then translated the song lyrics, “Take my hand, take my whole life too, for I can’t help falling in love with you” with a sweet and romantic scene at the end of the film.