Clair de lune is the 3rd movement of the Bergamasque Suite, which is one of the most famous piano suites by a French composer, Achille-Claude Debussy (1862-1918). Debussy created this suite in 1888, when he was 26 years old. But this work was not published until 1903. 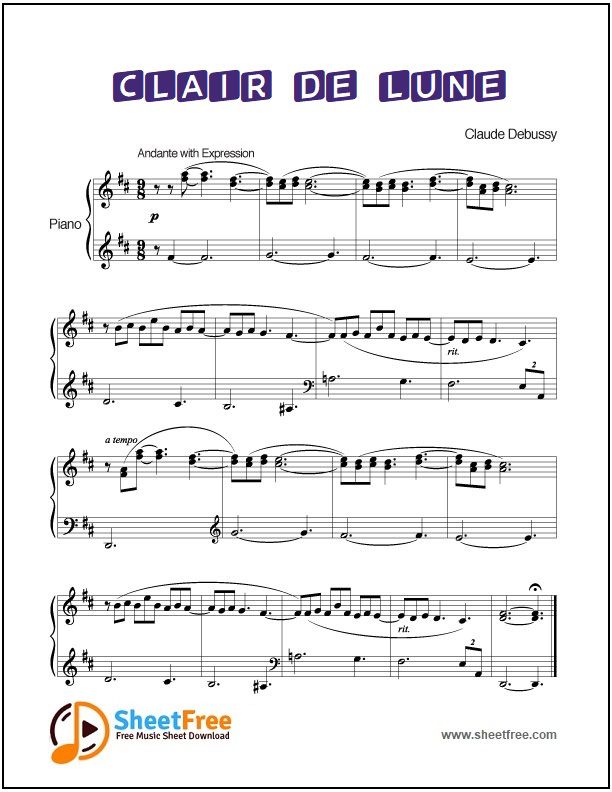 The 3rd Movement at Db Mayor is the most famous work in the Bergamasque Suite. Clair de lune means moonlight and almost all parts are played by pianissimo. This work was written with a poem by Paul Verlaine of the same name. Recently, Clair de lune became one of the music soundtracks from the big screen film, Twilight.

Clair de Lune is one of the famous works by Claude Debussy. Created around 1890 and published in 1905. For me Clair de Lune is like telling someone who was enjoying solitude in the dark sky and the bright moonlight while sitting still and watching the shadow of the moon in the calm lake water. Remembering his happy memories.

This work leaves a calming and pleasing impression even though the melody sounds sad and slow. Claude Debussy’s work was inspired by Paul Verlaine’s poem, Clair de Lune, which was also written in 1869.

Reporting from the Independent page, Debussy is known as one of the best composers of classical music in the 20th century. Debussy has an influence in terms of harmony and musical structure, which makes it known as an Impressionist musician.

Debussy was born in Saint-German-en-Kaye, on August 22, 1862. The eldest of five siblings from a seller of glassware showed his talent as a pianist at the age of 9 years. Only at the age of 11 years or in 1873 Debussy entered the Paris Conservatory to study piano and composition.

His talent is increasingly honed. Until 1884, at the age of 22, Debussy won the Grand Prix de Rome award with the cantata “L’Enfant Prodigue”.

Many consider Debussy inspired by German composer Richard Wagner. This can be seen from one of his famous works, “La damoiselle elue” and “Cinq (5) poemes de Charles Baudelaire”.

Debussy died on March 25, 1918 after suffering from rectal cancer. Even so, his name is still remembered even for a discovery outside of music. For example, Debussy Heights which is one of the mountains on Alexander Island in Antarctica and one of the craters on Mercury.