Clocks is a song sung by a British group band Coldplay. This song was composed by all Coldplay fans for their second album “A Rush of Blood to the Head”. the song was released in the UK as the third single from A Rush of Blood to the Head, which reached number nine on the UK Singles Chart. The album was released in the United States as the album’s second single, reaching number 29 on the Billboard Hot 100 and number 9 on the Billboard Modern Rock Tracks charts. this song won a Grammy Award for Record of the Year. 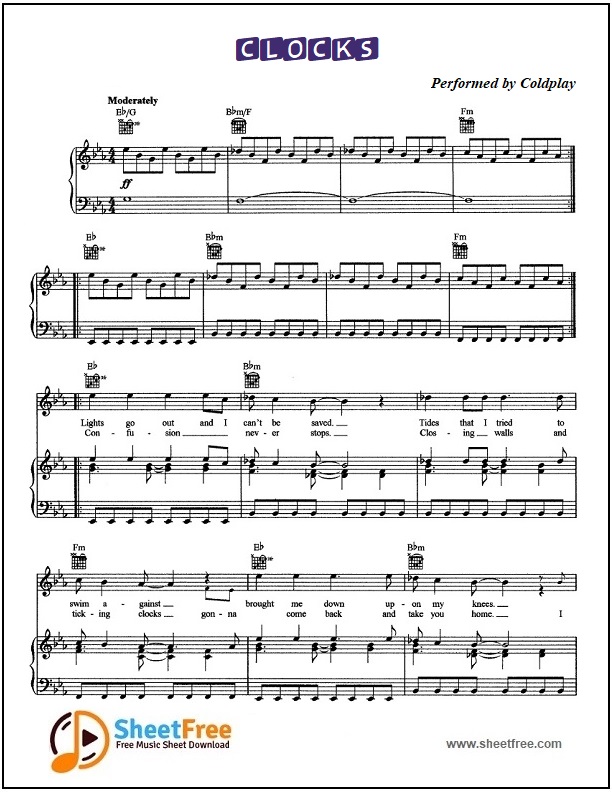 Coldplay is a rock band formed in London, United Kingdom, in 1996. This music group consists of Chris Martin as lead vocalist, Jonny Buckland as lead guitarist, Guy Berryman as bassist, and Will Champion as drummer.

Coldplay became famous with the release of the single “Yellow” in 2000 and was followed by their debut album released the same year, Parachutes, which was nominated for the Mercury Prize. Their second album, A Rush of Blood to the Head (2002), won several awards, including Album of the Year by NME. Meanwhile, the single Clocks from this album won the Record of the Year award at the 46th Grammy Award. The next album, X&Y became the best-selling album in the world in 2005.

Their 4th album, Viva la Vida or Death and All His Friends (2008), was produced by Brian Eno and received positive responses, won several Grammy Award nominations and won the 51st Grammy Award. In 2011, they released their 5th album, Mylo Xyloto, which received mixed positive responses, topped the album charts in 34 countries, and was the best-selling rock album in the United Kingdom in 2011. In March 2014, they announced their 6th album Their title Ghost Stories was released on May 19, 2014. Then the following year, Coldplay released the album “A Head Full of Dreams” on December 4, 2015. 4 years later, on November 22, 2019, Coldplay released an album titled “Everyday Life”.