Nocturne Opus 9. No.2 are a set of three nocturnes written by Frederic Chopin between 1830 and 1832 and dedicated to Madame Camille Pleyel. Despite being forever associated with the nocturne, (essentially a piece of particularly wistful, dreamy music, often intended to evoke images of the night) Chopin was not actually its inventor. Instead, the form was created by the Irish composer John Field, a man whose influence on Chopin can be heard clearly, not just in his solo piano music but also in his two piano concertos. 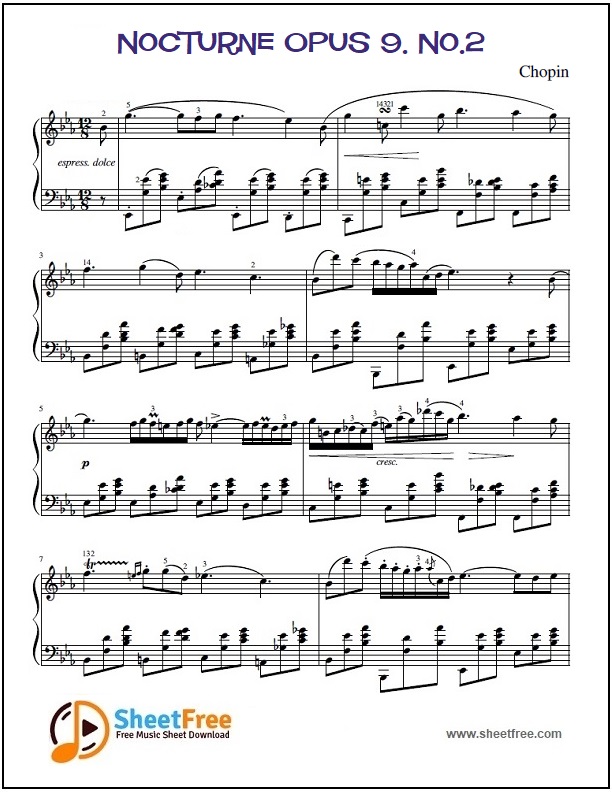 Chopin compiled the most famous Nocturne in the E-flat major, Op. 9, No. 2 when he was around twenty years old.

This famous nocturne is in the form of a round binary (A, A, B, A, B, A) with coda, C. Parts A and B become increasingly decorated with each repetition. The penultimate bar uses considerable rhythmic freedom, indicated by instructions, senza tempo (without tempo). The Nocturne in the E-flat major opens with a legato melody, mostly played by the piano, containing a graceful upward jump that becomes wider and wider as the line is opened. This melody is heard again three times during the song. With each repetition, this varies with increasingly complicated decorative tones and sounds. Nocturne also includes subordinate melodies, which are played with rubato.

The sonorous foundations for melody lines are provided by notes which are widely placed in the accompaniment, connected by the damper pedals. Waltz-like accompaniment gently emphasizes 12/8 meters, 12 beats for size are divided into four groups with 3 beats each.