One Summer’s Day is composed by Joe Hisaishi originally from “Day of the River” (あの日の川 Ano hi no Kawa) which is a score of the film Spirited Away. Spirited Away (Japanese: 千と千尋の神隠し Hepburn: Sen to Chihiro no Kamikakushi?, “Sen and Chihiro’s Spiriting Away”) is a 2001 Japanese animated fantasy film written and directed by Hayao Miyazaki and produced by Studio Ghibli. 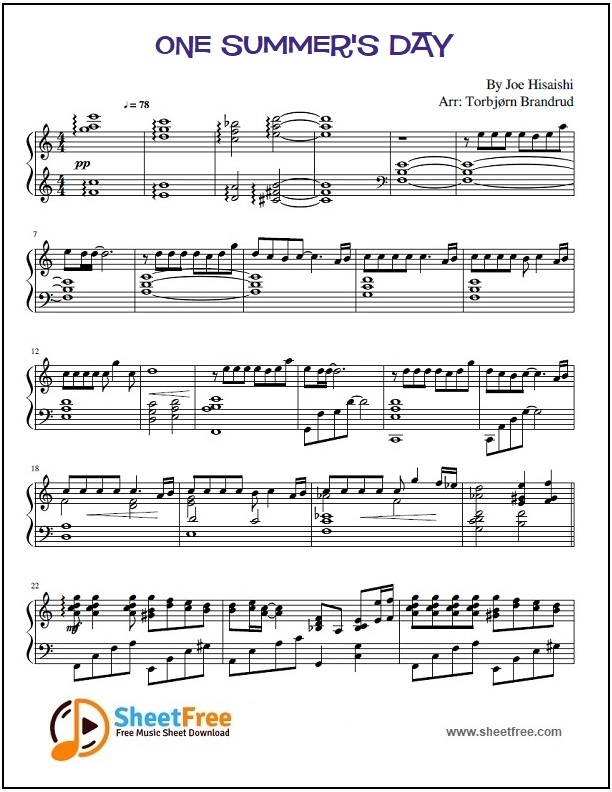 About ‘One Summer’s Day’

The film score of Spirited Away was composed and conducted by Miyazaki’s regular collaborator Joe Hisaishi, and performed by the New Japan Philharmonic. The soundtrack received awards at the 56th Mainichi Film Competition Award for Best Music, the Tokyo International Anime Fair 2001 Best Music Award in the Theater Movie category, and the 17th Japan Gold Disk Award for Animation Album of the Year. Later, Hisaishi added lyrics to “One Summer’s Day” and named the new version “The Name of Life” (いのちの名前, “Inochi no Namae”) which was performed by Ayaka Hirahara.

The closing song, “Always With Me” (いつも何度でも, Itsumo Nando Demo, literally, “Always, No Matter How Many Times”) was written and performed by Youmi Kimura, a composer and lyre-player from Osaka. The lyrics were written by Kimura’s friend Wakako Kaku. The song was intended to be used for Rin the Chimney Painter (煙突描きのリン, Entotsu-kaki no Rin), a different Miyazaki film which was never released.[28] In the special features of the Japanese DVD, Hayao Miyazaki explains how the song in fact inspired him to create Spirited Away. The song itself would be recognized as Gold at the 43rd Japan Record Awards.