“Shallow” is a song from the 2018 musical romantic drama called A Star Is Born. The song was performed by American singer Lady Gaga and American actor Bradley Cooper. 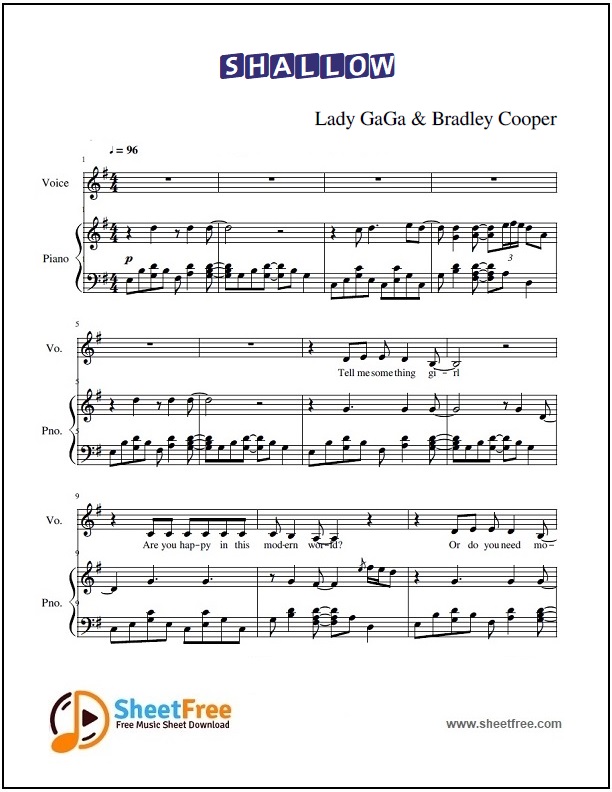 About ‘Shallow by Lady GaGa’

The duet song for singer Lady Gaga and actor Bradley Cooper, “Shallow”, was released on September 27, 2018, along with the music video. The 3 minute 36 second video features the amazing duo of Gaga and Cooper performing “Shallow”, one of the songs from the soundtrack of the film A Star Is Born. For information, A Star Is Born is Bradley Cooper’s debut as a director. He also became the main actor with Lady Gaga.

The scene begins with Jackson Maine (Cooper) singing alone on stage while playing the guitar. Shortly, Ally (Gaga) joined Maine. Together they both did a powerful duet. Their performances were interspersed with footage from the scenes of A Star is Born, which showed the romance that developed between Maine and Ally, and Maine’s struggle with being free from alcoholic beverages. “Shallow” written by Gaga together with Mark Ronson, Andrew Wyatt, and Anthony Rossomando is a powerful ballad that displays a striking harmony between Gaga and Cooper.

In an interview with Zane Lowe recently, Gaga cast praise for Cooper as a director and opponent and her singing abilities. “He sings from his soul and he knows how to tell a story when he sings and I hear it,” Gaga said. Gaga also told Lowe that “Shallow” occurs in “crucial momentum” in the film. “There are two people who talk to each other and talk about the need and the urge to dive to the deepest end and move away from the shallow area,” Gaga said. A Star Is Born tells the story of Ally (Gaga), a young singer and pursuing ideals, who falls in love with her mentor, Jackson Maine (Cooper), a famous country singer who has an inner war.