“The Scientist” is a song by British rock band Coldplay. The song was written collaboratively by all the band members for their second album, A Rush of Blood to the Head. It is built around a piano ballad, with lyrics telling the story about a man’s desire to love and an apology. The song was released in the United Kingdom as the second single from A Rush of Blood to the Head and reached number 10 in the UK Charts. It was released in the United States as the third single and reached number 18 on the US Billboard Modern Rock Tracks chart and number 34 on the Adult Top 40 chart. 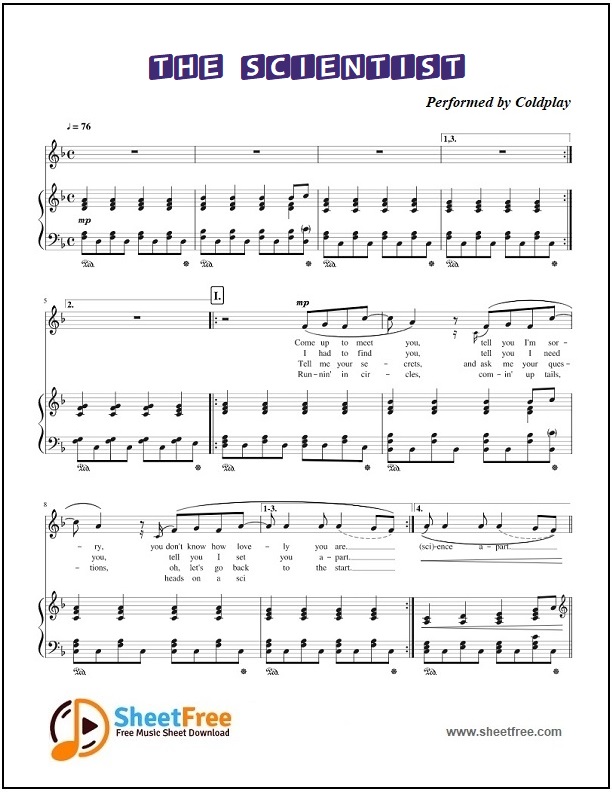 “The Scientist” is about a man (songwriter), who is trying to improve relations with his girlfriend. In his efforts, he carefully analyzed the roots of all problems based on thought and logic like scientists. But in the end he could not explain why the problem occurred, and why the relationship between him and his girlfriend became complicated.

“The Scientist” has a very melancholy rhythm. Even though it has been arranged with a piano tune whose tempo is dynamic coupled with the sound of a drum, this song still sounds melancholy and sad. The combination of guitar, drum, and piana is very harmonious. Martin managed to arouse the hearts of his fans with his sweet voice. The song is well interpreted. This song was written by Christ Martin and also contributed by several other Coldplay personnel namely Jonny Buckland, Guy Berryman, and Will Champion.

In addition to a perfect appreciation of Christ Martin’s voice, the video clip of the song also supports the meaning of the song “The Scientist”. The music video of this song is very simple. The property at the beginning of the music video “The Scientist” is just a divan, bicycle, car and a man who is played by the vocalist. Christ Martin always seems to be the first choice for his video clip models.