This Is Gospel is a song belonging to a rock group from the United States, Panic! at the Disco. The song was released on August 12, 2013 as the second single from their fourth studio album, Too Weird to Live, Too Rare to Die!. This song ranks number 86 on the Billboard Hot 100 charts. 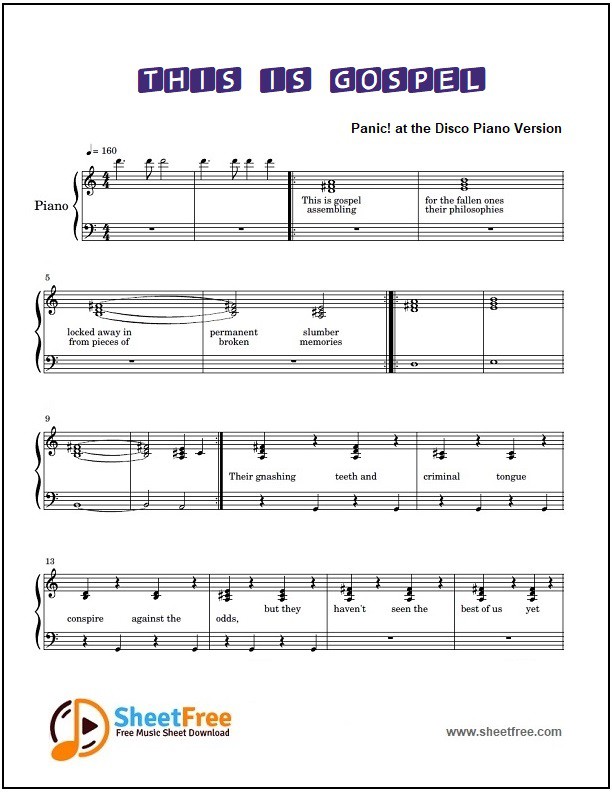 About ‘This is Gospel’

Panic! At The Disco, one of several bands that I value, besides Asking Alexandria, Paramore, My Chemical Romance, Jonas Brothers, and others. Even though I am a bit late to like Panic! At The Disco because of something I don’t know. Whereas from the beginning, I often heard the name of this band, but I was like turning a deaf ear to his songs. Until finally it arrives, I hear the first time, this song ‘This Is Gospel’.

Initially, I was impressed with the video clip, which you can see for yourself the concept is very crazy. The purpose of the video was well conveyed. With a distinctive pronunciation style of words from Brendon Urie (vocalist), this song is even more perfect when it arrives at Reff, supported by the role of a video clip that shows Brendon trying to rebel from the doctors who handle it.

In essence, this song This Is Gospel was very instrumental in my involvement in the songs Panic! At The Other Disco. Through This Is Gospel, I listened to I Write Sins Not Tragedies, Nine In The Afternoon, Lying Is The Most Fun A Girl Can Have Without Taking Her Clothes Off, Camisado, Time To Dance, Emperor’s New Clothes, Miss Jackson, Don’t Threaten Me With A Good Time, and many more delicious songs from Panic! At The Disco.

The band that was formed in 2004 released their first album in 2005 but I just heard this 2016. Very left behind. And you could say, I’m still the ‘Onion Boy’ business Panic! At The Disco. It’s just, I guarantee that I know all the songs now. I will become a fan who is truly a fan. Not fans who only like one song while others have never been listened to. I also know, some of their history, and I wouldn’t be afraid if there were exam questions about the history of this band.